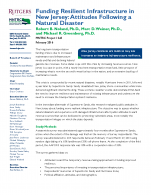 Will people pay for better infrastructure after a natural disaster?

San Jose, CA – March 1, 2016 – When Superstorm Sandy struck the East Coast in October of 2012, a seemingly perfect test case occurred of a population that had seen first-hand what natural disasters could do to a region. Researchers at the Mineta National Transit Research Consortium surveyed New Jersey residents approximately five months after the tragedy to determine whether residents agreed that there was a need for increased spending on infrastructure, and whether they would be willing to pay for it via increased taxes. The responses were further divided into those who were willing to be taxed directly via mechanisms such as a gasoline or sales tax—with a five-year sunset provision—and those who were willing for “others” to be taxed, preferring a hotel/recreation tax or the issuance of bonds, thereby transferring responsibility to tourists, or to a future generation. The peer-reviewed report Funding Resilient Infrastructure in New Jersey: Attitudes Following a Natural Disaster explains that while residents agreed that transportation infrastructure did need to be rebuilt and improved, majorities did not support raising their own taxes, even for small amounts or for a limited time, to pay for it. The primary author was Robert B. Noland, PhD, who conducted the research with Marc D. Weiner, PhD, and Michael R. Greenberg, PhD.

Dr. Noland concluded that “there seems to be—not just among New Jersey’s political elites, but also among its mass public—a ‘kick the can down the road’ attitude toward paying for infrastructure and maintenance.”

The study found a correlation with being “left-leaning” and being more willing to embrace one of the “tax me” alternatives (gasoline, sales, or income tax) presented for raising revenue. A potential limitation of the study was its lack of specifics in explaining exactly how the funds would be used. Dr. Noland explains that “it is possible that support would be higher when survey questions provide more detail on specific transportation investments. Many regions have passed successful taxation referendums in this way.” He points out that further research is needed to see if this approach would soften public attitudes toward short-term taxes to reinforce and improve necessary infrastructure.

The need to educate the public about transportation needs is tremendous, in New Jersey and in the nation at large; maintenance needs are increasing, as is the prospect of heightened natural disasters due to climate change. Revenue from the federal gasoline tax is insufficient and declining in real terms.

It is critical that those who are exploring transportation solutions determine how to explain the connection between spending sensibly now, and being prepared when large-scale natural disasters strike, as they always will.

The report and brief is also available from the Mineta National Transit Research Consortium website: http://transweb.sjsu.edu/project/1243.html