On Monday October 30, 2017, VTC’s Leigh Ann Von Hagen and Sean Meehan, together with partners from the Plainfield Public School District and the City of Plainfield, received a 2017 NJ APA Planning Excellence Award for the state’s first district-wide school travel plan. The plan resulted from the fall 2016 graduate studio where students, working with their advisors and school/municipal clients, created the plan through a thorough examination of the city’s history, demographics, transportation data (including crash data), and city and school cycling and walking policies.

In Plainfield, population 50,400, more than half the schoolchildren arrive by car to their neighborhood school and less than 1% arrive by bike. Fear of injury from crashes was of significant concern. In order to address pedestrian and bicycle safety, the Plainfield City and school district developed a new partnership supported by VTC at Rutgers, the NJDOT, EZ Ride Transportation Management Association, and a graduate class at the Bloustein School of Planning and Public Policy at Rutgers, to develop the state’s first district-wide school travel plan. Students analyzed demographics, mapped pedestrian and bicycle crashes and school catchment areas, gathered survey data on student travel mode and school principal concerns, conducted walkability assessments with a photo inventory, gathered feedback from the steering committee, crossing guards and parents, and identified municipal or school district policies that support or hinder walking and bicycling. The students developed an action plan that describes barriers and solutions that address education, encouragement, enforcement, engineering, and evaluation. The plan supported an application for federal funding that was recently awarded, a $304,000 Safe Routes to School infrastructure grant.  Both the plan and the wide-reaching process used to develop it are being replicated in towns across New Jersey.

The report can be viewed here. 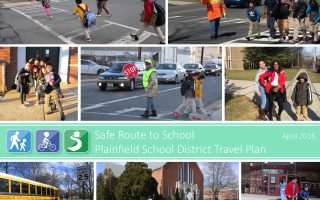