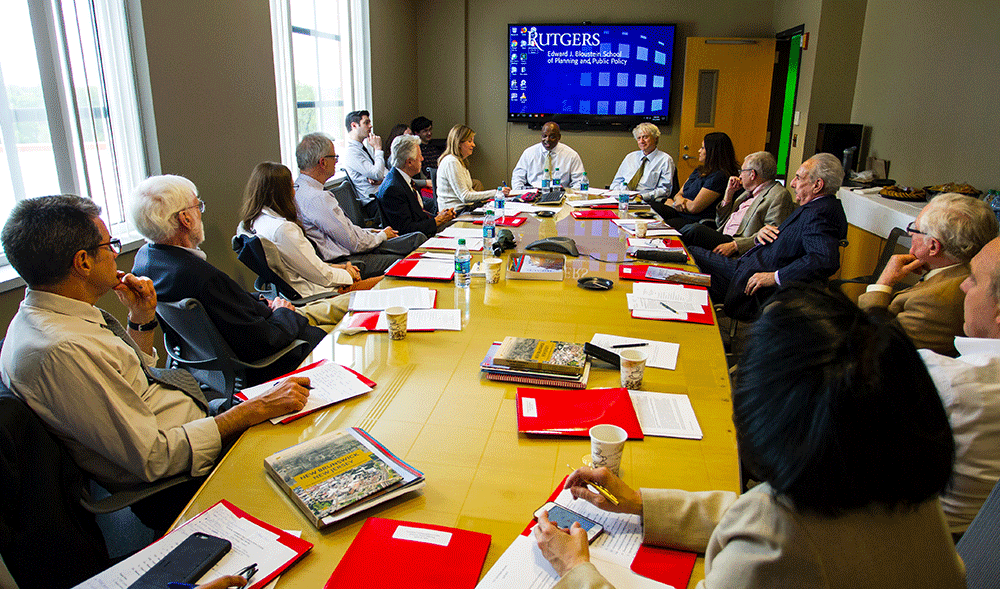 The most recent meeting of the VTC Advisory Board was on April 22, 2019. Meeting highlights included the introduction of Dean Piyushimita (Vonu) Thakuriah, updates on the work of the National Transit Institute (NTI), of the Bloustein School, and on the VTC strategic planning process. Also VTC Director Robert Noland presented preliminary analysis on shared e-scooters.

The VTC Advisory board includes:

Robert E. Skinner, Jr. (chair) retired as Executive Director of the Transportation Research Board in February 2015 after 20 years in that position and now works as a part-time transportation consultant.  Prior to becoming the TRB executive director, he directed TRB’s transportation policy study activities.  During his career, Mr. Skinner has served on a number of advisory committees for university transportation research organizations, as well as special committees convened in the aftermath of major transportation accidents. Mr. Skinner is a registered professional engineer. 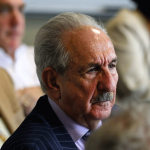 William D. Bierman is a senior partner in the law firm of Nowell Amoroso Klein Bierman, P.A. in New Jersey and New York where he leads a unique transportation law group. He has been actively engaged in the practice of transportation law for more than forty years and his clients include transportation companies involved in all modes of transportation. Mr. Bierman is also the long time Executive Director of the Transportation Loss Prevention and Security Association (TLP&SA) and he is the former Chairman of the Conference of Freight Counsel. In addition to serving on the VTC Advisory Board, Mr. Bierman also serves on the Board of Directors of the Country-Wide Insurance Company and he represents the New Jersey Motor Truck Association. Mr. Bierman is a graduate of Rutgers University (B.A. 1964) and both Rutgers University School of Law (J.D. 1967) and the New York University School of Law (L.L.M. 1970).

Flora Castillo is Vice President of Corporate Marketing at AmeriHealth Mercy, the largest family of Medicaid Health Plans in the US, headquartered in Philadelphia. A resident of Ventnor, Ms. Castillo became the first and only Latina appointed to serve on the NJ TRANSIT Board of Directors in May 1999. She chairs the NJ TRANSIT Board’s administration and customer service committees and oversees a budget of nearly $3 billion and 11,000 employees. Ms. Castillo is a member of the Board of the American Public Transportation Association, the Women’s Transportation Seminar, the National Urban Fellows and the Conference of Minority Transportation Officials. Born and raised in El Salvador, Ms. Castillo immigrated to Long Island, NY in 1981 where she received a Bachelor’s degree in Public Administration from Long Island University. 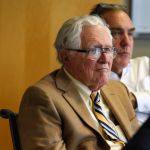 Thomas B. Deen is the former Executive Director of the Transportation Research Board and now works as a transportation consultant. During his time at TRB, Mr. Deen initiated efforts that led to the creation of the Strategic Highway Research Program and Transit Cooperative Research Program. Before joining TRB, Mr. Deen served as President of Alan M. Voorhees and Associates. More recently, Mr. Deen has been appointed to head panels examining traffic problems in the Washington area, the potential for maglev between Baltimore and Washington, deck failures on the Chesapeake Bay Bridge and the transportation of highly radioactive spent nuclear fuel to the Yucca Mountain repository. 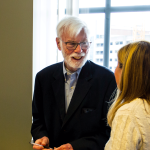 Mortimer L. Downey, III serves as a Senior Advisor to Parsons Brinckerhoff providing advisory and management consulting services to public and private owners, developers, financers and builders of infrastructure projects worldwide. He serves on the Board of Directors of the Washington Metropolitan Area Transportation Authority, which operates the Washington Metro. Mr. Downey held the position of U.S. Deputy Secretary of Transportation for eight years, becoming the longest serving individual in that post, and was a member of the Board of Directors of the National Railroad Passenger Corporation (Amtrak). Previously, Mr. Downey was the executive director and chief financial officer of the New York Metropolitan Transportation Authority (MTA), the nation’s largest independent public authority. 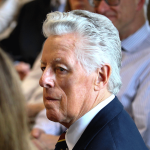 James J. Florio, Esq., Governor of New Jersey from 1990 to 1994, is a Founding Partner of the law firm of Florio Perrucci Steinhardt and Fader, L.L.C. and was Founder and CEO of XSPAND, an asset management company. Mr. Florio is a University Professor Emeritus for Public Policy and Administration at the Edward J. Bloustein Graduate School of Public Policy and a Senior Fellow at The John J. Heldrich Center for Workforce Development at Rutgers, The State University of New Jersey. Mr. Florio currently serves on the Board of Directors of the NJ Health Care Quality Institute and is an authority on international trade, energy, environment, health care and transportation issues. While in Congress from 1974 through 1990, representing the 1st District of New Jersey, Mr. Florio authored the Comprehensive Environmental Response compensation and Liability Act, known as the “Superfund” law, our nation’s primary program for cleaning up hazardous waste sites. Mr. Florio was the 1993 recipient of the Profile in Courage Award by the John F. Kennedy Library Foundation.

Arthur E. Imperatore, Jr. is President and Chief Executive Officer of Arcorp Properties, which includes several privately held corporations, including NY Waterway, Port Imperial Marina, Dry Dock Restaurants and Imperatore Landscaping. His corporate involvements include real estate development, ferry and connecting bus transportation, and full-service restaurant operations. He serves as a member of the Board of Newark Museum, the Regional Plan Association and The Hudson River Park Trust, and is a Commissioner of the New Jersey Railroad and Transportation Museum Commission. 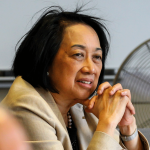 Eva Lerner-Lam has 33 years of experience in transportation planning, operations, research, and policy-making. As founder and President of the Palisades Consulting Group, Inc., she specializes in leading strong, multidisciplinary approaches to solving problems in complex transportation systems in the US and China. She was Director of Planning and Operations for the San Diego Metropolitan Transit Development Board during the startup of the San Diego Trolley in the early 1980s, and later was appointed to the New Jersey Transit Corporation Board of Directors.

Robert E. Mortensen retired from Conrail in 1996, concluding a 30-year career, and now serves as general manager of The Philadelphia Singers. After leaving Conrail, Mr. Mortensen became an independent consultant advising foreign governments how to privatize state-owned railroads. He currently serves as Chief Executive officer of Rift Valley Railways (Uganda). A graduate of Rutgers, Mr. Mortensen was a member of the Conrail team which conducted the strategic commercial planning for the company at its inception. 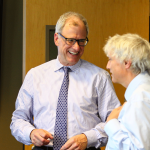 Lawrence Pesesky is a Senior Vice President at The Louis Berger Group, Inc., headquartered in Morristown, NJ, and he has worked for the company since 1986. In that time, he has directed and managed numerous transportation policy and research, planning, and project development studies both in New Jersey and nationally. He is the principal investigator of NCHRP Reports 403 and 466: Guidance for Estimating the Indirect Effects of Proposed Transportation Projects, which established a widely implemented framework and supporting analytical methods for assessing induced growth and other transportation project indirect effects. He also directed the firm’s environmental policy and impact assessment support of state and bi-state transportation agencies overseeing Lower Manhattan’s post-9/11 transportation system recovery and the firm’s environmental program management of the New Jersey Turnpike Interchange 6 to 9 Widening Program. He is member of the American Planning Association, the American Institute of Certified Planners, the Center for Environmental Excellence by AASHTO, and the Harvard/Zofnass Program Sustainable Infrastructure Advisory Board. He received a B.Sc. in Agricultural Economics from Cornell University in 1978 and a M.Sc. in Geography from Rutgers, The State University of New Jersey in 1986. 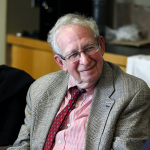 Martin E. Robins has almost 40 years transportation of experience in the field of transportation planning and policy. He was the director of the Alan M. Voorhees Transportation Center (VTC) at Rutgers University, served as a Senior Fellow and is now Director Emeritus. He founded the Center’s predecessor organization, the Transportation Policy Institute in 1998. At Rutgers he wrote studies, reports and articles on the organization of intercity rail, transportation finance, transit-oriented development, freight policy and pedestrian safety. Before coming to Rutgers University, from 1994 to 1998, he was Project Director of Access to the Region’s Core, a joint planning venture of the Port Authority of New York & New Jersey, the Metropolitan Transportation Authority and NJ TRANSIT that examined the need for a new trans-Hudson passenger rail tunnel. Mr. Robins served as Director of NJ TRANSIT’s Waterfront Transportation Office from 1988 to 1994. In this capacity he oversaw the planning of the Hudson-Bergen Light Rail Line, a successful project that now carries more than 20,000 people a day and is shaping the development along the Hudson County waterfront. He served as Director of Planning and Development for the Port Authority of NY & NJ from 1983 to 1987, where he conducted studies of trans-Hudson transportation and freight movement. In 1979, he assisted NJ Commissioner of Transportation Louis J. Gambaccini in the founding of NJ Transit.

Ruby Siegel is a Vice President/Senior Project Manager with AECOM in the NY/NJ Metro region.  Ms. Siegel has over 35 years of management and planning experience in the transportation field.  She has worked with transportation agencies on long-range and strategic plans, corridor and major investment studies, feasibility studies and alternatives analyses, and capital investment strategies.  For the last several years, Ms. Siegel has applied her transportation planning expertise to guide some of the Northeast region’s most significant and complex transportation projects through the federal environmental review process in compliance with the National Environmental Policy Act of 1969 (NEPA). Ms. Siegel successfully led the Access to the Region’s Core EIS to a Record of Decision in January 2009. Ms. Siegel is currently the Deputy Project Manager – Environment for a Joint Venture team working with the Federal Railroad Administration on the NEC FUTURE program to create a long-term vision for the Northeast Corridor (NEC) passenger rail line, and provide a framework for incremental investments to support the region’s growing population, employment and economy.  Ms. Siegel is a trustee on the Friends of the New York Transit Museum Board and member of WTS, through which she participates in the Mentors Program.  Ms. Siegel is Vice Chair of the Planning Board in Glen Ridge, New Jersey.  Ms. Siegel has an A.B. in Urban and Economic Geography from the University of California at Berkeley and an M.C.R.P in Transportation Planning from Harvard University Graduate School of Design. 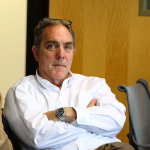 Alan W. Voorhees is Senior Vice President for Investments at UBS Financial Services. He was previously Manager of Corporate Finance for Allied-Signal, Inc. (now Honeywell). He is a Board Member of the George Street Playhouse and is the Finance Chair at the United Methodist Church in Madison, NJ. His involvement guarantees the ongoing commitment of the Voorhees family to the Alan M. Voorhees Transportation Center.

Paul J. Wiedefeld served as the General Manager/CEO of the Washington Metro from 2015 to 2022.  Metro is one of the nation’s largest transit systems, serving more than 300 million passenger trips annually, with an annual $2.2 billion operating budget and a $2.5 billion capital program. Prior to joining Metro, Paul was the CEO of Baltimore Washington International Airport (BWI).   During his tenure, BWI grew to become the leading passenger airport in the Washington metropolitan region. To support this growth, he managed the largest capital expansion in the Airport’s history, including the construction of a 26-gate terminal for Southwest airlines, an 8,400-space parking garage and a modern consolidated rental car facility. Paul also served as the CEO of the Maryland Transit Administration, managing day-to-day operations of the nation’s 13th largest transit system, including commuter rail, subway, light rail, buses, and paratransit.  Paul has also held various transportation planner positions at the county, MPO, and state levels of government during his career. In the private sector, Paul served for a decade as a consultant with the international engineering firm, Parsons Brinckerhoff.   He has a Bachelor’s degree in Political Science from Towson University and a Master’s degree in City and Regional Planning from Rutgers University.