It is with great sadness that the Bloustein School announces the passing of Paul J. Larrousse, Faculty Fellow and Director of the National Transit Institute, who passed away after a short illness on Wednesday, November 14.

“We grieve not only at the passing of a widely respected colleague, teacher, and leader but also for the loss his family suffers,” said Piyushimita (Vonu) Thakuriah, Distinguished Professor and Dean, Edward J. Bloustein School of Planning and Public Policy. “Paul’s work was known nationally throughout the transit industry, and I know he leaves a big gap in his field.”

The National Transit Institute was established under the Intermodal Surface Transportation Efficiency Act of 1991 to develop, promote, and deliver training and education programs for the public transit industry. It became part of the Alan M. Voorhees Transportation Center at the Bloustein School in 1999. NTI is funded by Title 49 U.S.C. Section 5315(d) MAP-21 and Section 5314(c) FAST Act. Its mission is to provide training, education, and clearinghouse services in support of public transportation and quality of life in the United States.

Paul assumed the directorship of the National Transit Institute in July 2000.  He was designated as a faculty fellow in 2003 and taught the graduate level “Transit Management and Planning” course each fall as well as a graduate transit planning studio in the spring. 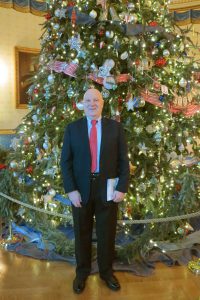 In 2012 Paul was invited, as part of the U.S. Department of Transportation contingent, to enjoy viewing and visiting the White House for the holidays. NTI serves as the training arm for the Federal Transit Administration.

He received his bachelor of arts degree in geography and urban studies from Saint Anselm College in Manchester, NH and a master’s of science in transportation planning and engineering from New York University Tandon School of Engineering.

With almost two decades of service at that Bloustein School and National Transit Institute, Paul was well known and admired by his many faculty and staff colleagues and students. Michael R. Greenberg, Distinguished Professor and former Dean of the Bloustein School, noted that, “Paul Larrousse was an encyclopedia of knowledge about public transit in the United States. He not only ran NTI, but he also lived the part. He loved taking trains and buses, and if I wanted to go somewhere in the U.S. he could tell me how to get there by public transportation and roughly how long it would take.”

“Paul and I sometimes took the same Amtrak train to Washington or we accidentally met at Union Station.  I always enjoyed those rides. Paul was a good teacher with a lot of stories to tell about how transit systems really worked and why they sometimes did not. On a personal level, he was friendly, had an easy smile, and a sense of humor.  Next time I am in DC’s Union Station, I will immediately think of Paul.”

The NTI staff will treasure their memories of Paul and are committed to continuing his work with zeal and passion. Judy Kolva, NTI Program Development Specialist accurately noted that, “Paul demanded a focus from NTI, as the country’s transit training arm, to assure that our courses truly address industry needs.” NTI will now build upon the lasting foundation that Paul left striving to enhance the capacity of transit agencies across the country and, in doing so, also enhance the countless large, small, urban, and rural communities that those transit agencies serve.

Mr. Larrousse served as chair Middlesex County (NJ) Transportation Coordinating Committee and also on the East Brunswick Township (NJ) Traffic Advisory Board.  He previously served as chair of the American Public Transit Association’s Research and Technology Committee and was the chair of the Workforce Development Committee. He also thoroughly enjoyed his service on the Transit Cooperative Research Program Oversight and Project Selection Committee.  He continued to be involved in various APTA and TCRP committees.

Paul was an avid traveler, a devoted Philadelphia Flyers fan, traveled the world for Above & Beyond: Common Ground concerts. Paul was not only an expert on the transit industry in the United States, but also abroad.  He took pride in visiting transit stations throughout the world and enjoyed sharing his “obligatory transit pictures” with his colleagues and with his many friends.

Memorial contributions can be made in his memory to The Human Rights Campaign at https://www.hrc.org/.