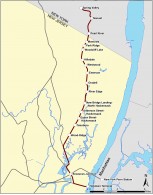 Although researchers have long argued in favor of off-peak transit service, studies that have empirically estimated its benefits regarding revenue generation, trip diversions, and greenhouse gas (GHG) emission are rare. This study provides important evidence about the benefits of off-peak commuter rail service by focusing on the Pascack Valley line in New Jersey, where off-peak service was introduced in October 2007. The research involved two focus groups and an onboard survey of passengers. Benefits were estimated regarding additional revenue generation and reduction in vehicle miles traveled (VMT) and GHG emission. The research shows that the new off-peak service potentially reduced VMT by more than 12 million annually due to diversions from other modes. Although diversions from other modes resulted in a substantial reduction in GHG emissions, due to the additional diesel fuel used by the new trains, the net GHG savings were in the range of 28–49 %. The research further shows that both peak period and off-peak riders benefited from the new off-peak service. Evidence is found about an increase in new transit riders and a modest increase peak period usage because of the off-peak service.