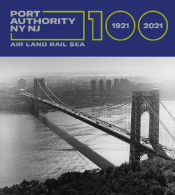 Join the Alan M. Voorhees Transportation Center at Rutgers, The State University of New Jersey and the Port Authority of New York and New Jersey as we celebrate the Port Authority’s first 100 years and commemorate the agency’s transformational impact on the growth of the region and look forward to the Authority’s next 100 years of delivering world-class 21st century infrastructure. As part of the celebration, the Alan M. Voorhees Transportation Center will host two symposia.  The first event will be held on June 16, 2021.  The second event will be convened in the Fall.

In order to attend this event, you must pre-register.

The program will feature keynote talks by Dr. James Hughes, University Professor and former Dean of the Edward J. Bloustein School of Planning and Public Policy at Rutgers and Rosemary Scanlon, former Chief Economist for the Port Authority of New York and New Jersey.  The key note talks will celebrate the Authority’s history and accomplishments over the last century and highlight the macro-trends and micro-influences that shaped the New York metropolitan region and the Authority’s work over that period.

In addition, a panel of speakers will showcase and discuss three recent Port Authority projects – Access the Region’s Core and the Gateway Tunnel; the rebuilding of the World Trade Center site and the Oculus Transportation Hub; and the raising of the Bayonne Bridge. Each project exemplifies the important role the Authority plays in the region by thinking big, solving complex problems, and stewarding the region’s economy.  Tom Wright, President and CEO of the Regional Plan Association will provide closing remarks.