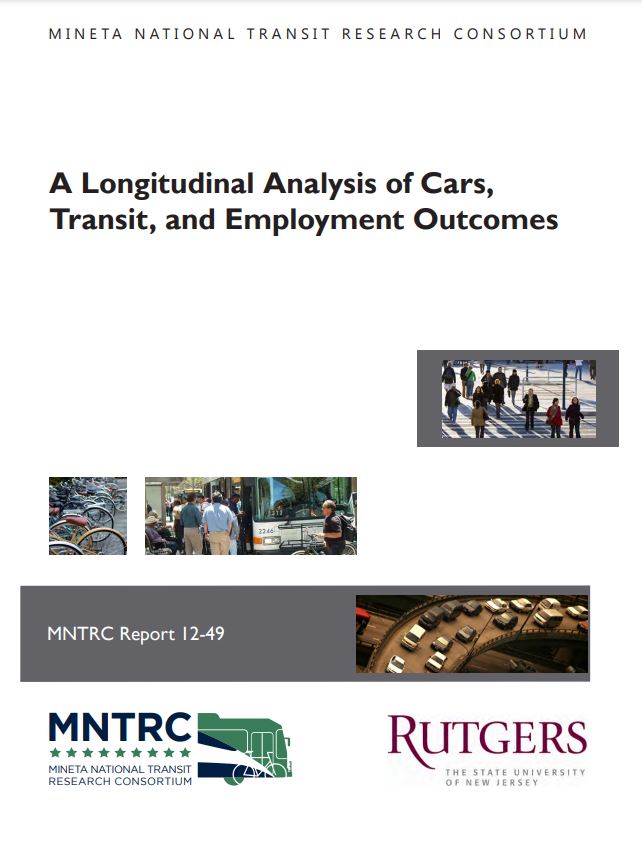 A Longitudinal Analysis of Cars, Transit, and Employment Outcomes

How does access to cars or transit influence one’s economic outcomes?

How does access to particular types of transportation influence individuals’ economic outcomes? And do typical “snapshot” approaches to research overlook variations in car ownership over time? Ongoing economic development strategies, and the policies that create them, depend on accurate data. A Longitudinal Analysis of Cars, Transit and Employment Outcomes, published by the Mineta National Transit Research Consortium (MNTRC), improves on existing data by analyzing groups that have variable access to automobiles – poor families, immigrants, and people of color. Principal investigator was Michael J. Smart, PhD, working with Nicholas J. Klein, PhD.

“Improving job access continues to be one of the most important priorities for transportation planners,” said Dr. Smart. “But policy-makers and researchers debate whether this goal is better served by investments in public transportation or increasing access to vehicles. The answer can be murky. Cars are costly to own, although they do improve chances for employment. At the same time, the role of public transit in improving economic outcomes is less clear.”

Among the research findings:

Ultimately, the costs and benefits of cars are neither entirely economic nor borne only by individual families. Increased car ownership has negative impacts to society in terms of pollution, congestion, and traffic injuries and fatalities. Similarly, the benefits are not only economic. Access to transportation resources can help improve quality of life by increasing people’s access to food, recreation, and social opportunities as well as to jobs.

The report is also available for free download from https://transweb.sjsu.edu/project/1244.html