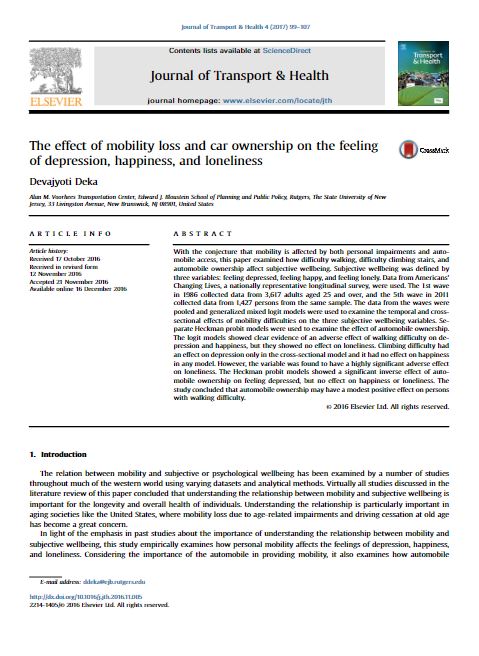 The effect of mobility loss and car ownership on the feeling of depression, happiness, and loneliness

With the conjecture that mobility is affected by both personal impairments and automobile access, this paper examined how difficulty walking, difficulty climbing stairs, and automobile ownership affect subjective wellbeing. Subjective wellbeing was defined by three variables: feeling depressed, feeling happy, and feeling lonely. Data from Americans’ Changing Lives, a nationally representative longitudinal survey, were used. The 1st wave in 1986 collected data from 3,617 adults aged 25 and over, and the 5th wave in 2011 collected data from 1,427 persons from the same sample. The data from the waves were pooled and generalized mixed logit models were used to examine the temporal and cross-sectional effects of mobility difficulties on the three subjective wellbeing variables. Separate Heckman probit models were used to examine the effect of automobile ownership. The logit models showed clear evidence of an adverse effect of walking difficulty on depression and happiness, but they showed no effect on loneliness. Climbing difficulty had an effect on depression only in the cross-sectional model and it had no effect on happiness in any model. However, the variable was found to have a highly significant adverse effect on loneliness. The Heckman probit models showed a significant inverse effect of automobile ownership on feeling depressed, but no effect on happiness or loneliness. The study concluded that automobile ownership may have a modest positive effect on persons with walking difficulty.