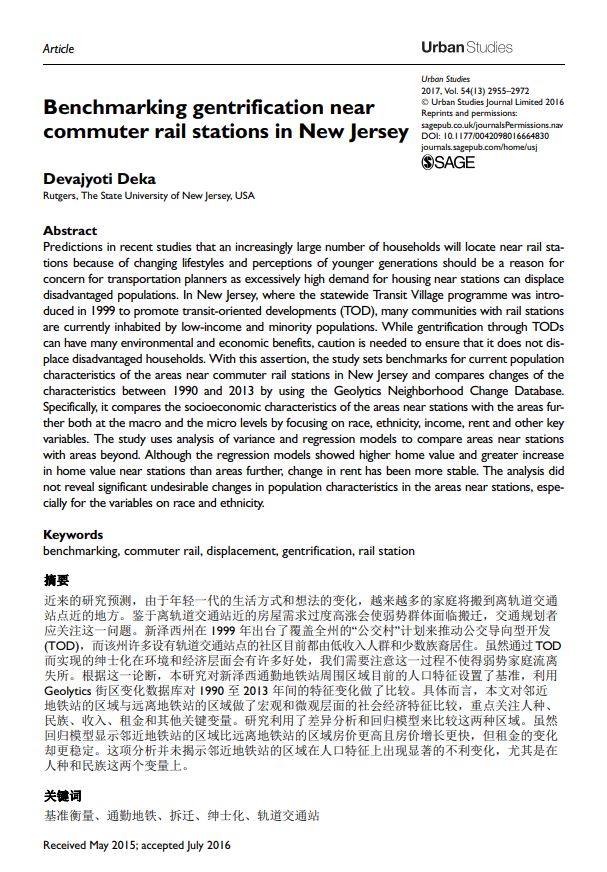 Predictions in recent studies that an increasingly large number of households will locate near rail stations because of changing lifestyles and perceptions of younger generations should be a reason for concern for transportation planners as excessively high demand for housing near stations can displace disadvantaged populations. In New Jersey, where the statewide Transit Village programme was introduced in 1999 to promote transit-oriented developments (TOD), many communities with rail stations are currently inhabited by low-income and minority populations. While gentrification through TODs can have many environmental and economic benefits, caution is needed to ensure that it does not displace disadvantaged households. With this assertion, the study sets benchmarks for current population characteristics of the areas near commuter rail stations in New Jersey and compares changes of the characteristics between 1990 and 2013 by using the Geolytics Neighborhood Change Database. Specifically, it compares the socioeconomic characteristics of the areas near stations with the areas further both at the macro and the micro levels by focusing on race, ethnicity, income, rent and other key variables. The study uses analysis of variance and regression models to compare areas near stations with areas beyond. Although the regression models showed higher home value and greater increase in home value near stations than areas further, change in rent has been more stable. The analysis did not reveal significant undesirable changes in population characteristics in the areas near stations, especially for the variables on race and ethnicity.