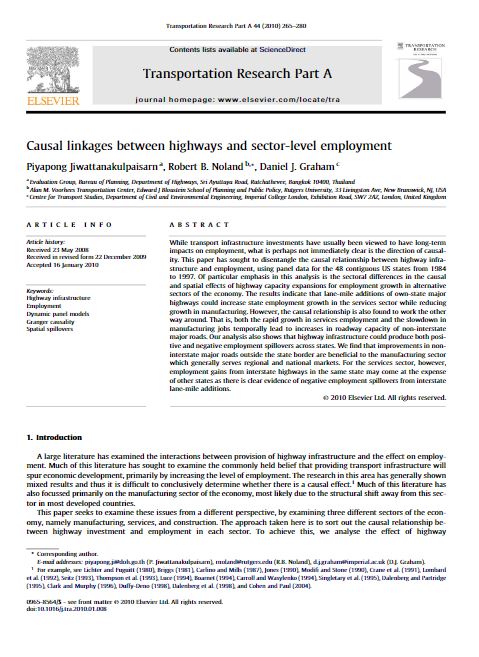 While transport infrastructure investments have usually been viewed to have long-term impacts on employment, what is perhaps not immediately clear is the direction of causality. This paper has sought to disentangle the causal relationship between highway infrastructure and employment, using panel data for the 48 contiguous US states from 1984 to 1997. Of particular emphasis in this analysis is the sectoral differences in the causal and spatial effects of highway capacity expansions for employment growth in alternative sectors of the economy. The results indicate that lane-mile additions of own-state major highways could increase state employment growth in the services sector while reducing growth in manufacturing. However, the causal relationship is also found to work the other way around. That is, both the rapid growth in services employment and the slowdown in manufacturing jobs temporally lead to increases in roadway capacity of non-interstate major roads. Our analysis also shows that highway infrastructure could produce both positive and negative employment spillovers across states. We find that improvements in non-interstate major roads outside the state border are beneficial to the manufacturing sector which generally serves regional and national markets. For the services sector, however, employment gains from interstate highways in the same state may come at the expense of other states as there is clear evidence of negative employment spillovers from interstate lane-mile additions.