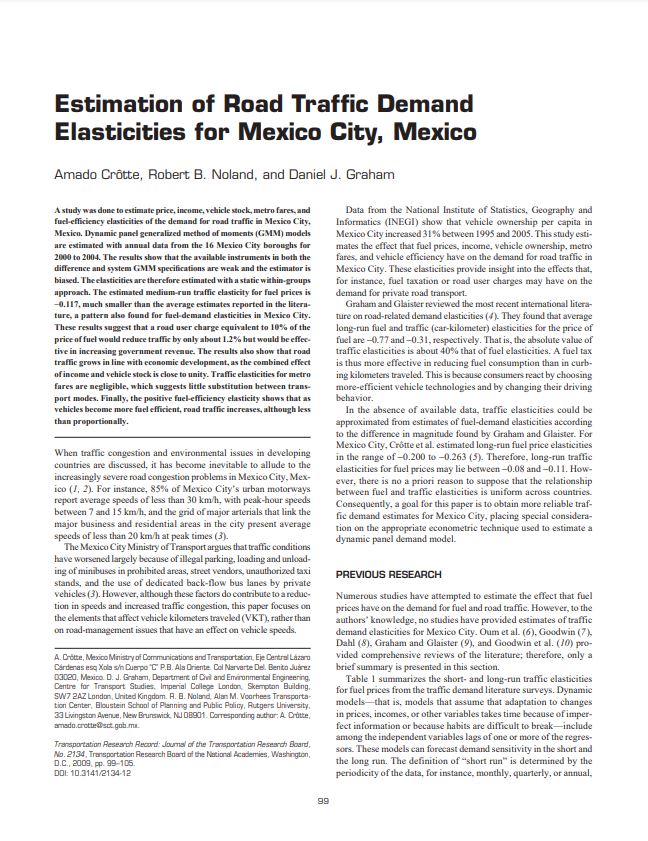 A study was done to estimate price, income, vehicle stock, metro fares, and fuel-efficiency elasticities of the demand for road traffic in Mexico City, Mexico. Dynamic panel generalized method of moments (GMM) models are estimated with annual data from the 16 Mexico City boroughs for 2000 to 2004. The results show that the available instruments in both the difference and system GMM specifications are weak and the estimator is biased. The elasticities are therefore estimated with a static within-groups approach. The estimated medium-run traffic elasticity for fuel prices is -0.117, much smaller than the average estimates reported in the literature, a pattern also found for fuel-demand elasticities in Mexico City. These results suggest that a road user charge equivalent to 10% of the price of fuel would reduce traffic by only about 1.2% but would be effective in increasing government revenue. The results also show that road traffic grows in line with economic development, as the combined effect of income and vehicle stock is close to unity. Traffic elasticities for metro fares are negligible, which suggests little substitution between transport modes. Finally, the positive fuel-efficiency elasticity shows that as vehicles become more fuel efficient, road traffic increases, although less than proportionally.