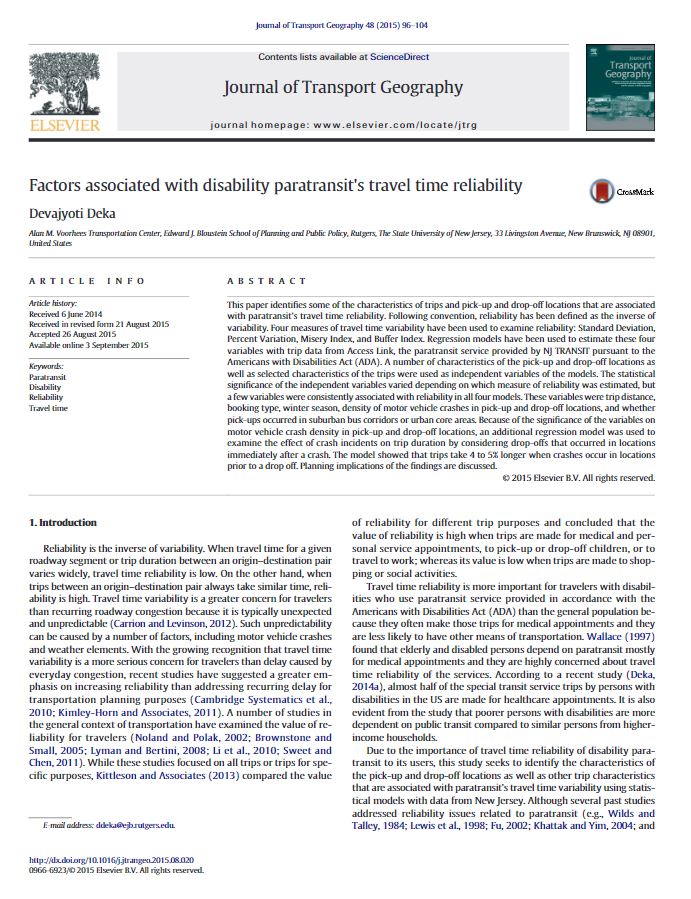 This paper identifies some of the characteristics of trips and pick-up and drop-off locations that are associated with paratransit’s travel time reliability. Following convention, reliability has been defined as the inverse of variability. Four measures of travel time variability have been used to examine reliability: Standard Deviation, Percent Variation, Misery Index, and Buffer Index. Regression models have been used to estimate these four variables with trip data from Access Link, the paratransit service provided by NJ TRANSIT pursuant to the Americans with Disabilities Act (ADA). A number of characteristics of the pick-up and drop-off locations as well as selected characteristics of the trips were used as independent variables of the models. The statistical significance of the independent variables varied depending on which measure of reliability was estimated, but a few variables were consistently associated with reliability in all four models. These variables were trip distance, booking type, winter season, density of motor vehicle crashes in pick-up and drop-off locations, and whether pick-ups occurred in suburban bus corridors or urban core areas. Because of the significance of the variables on motor vehicle crash density in pick-up and drop-off locations, an additional regression model was used to examine the effect of crash incidents on trip duration by considering drop-offs that occurred in locations immediately after a crash. The model showed that trips take 4 to 5% longer when crashes occur in locations prior to a drop off. Planning implications of the findings are discussed.