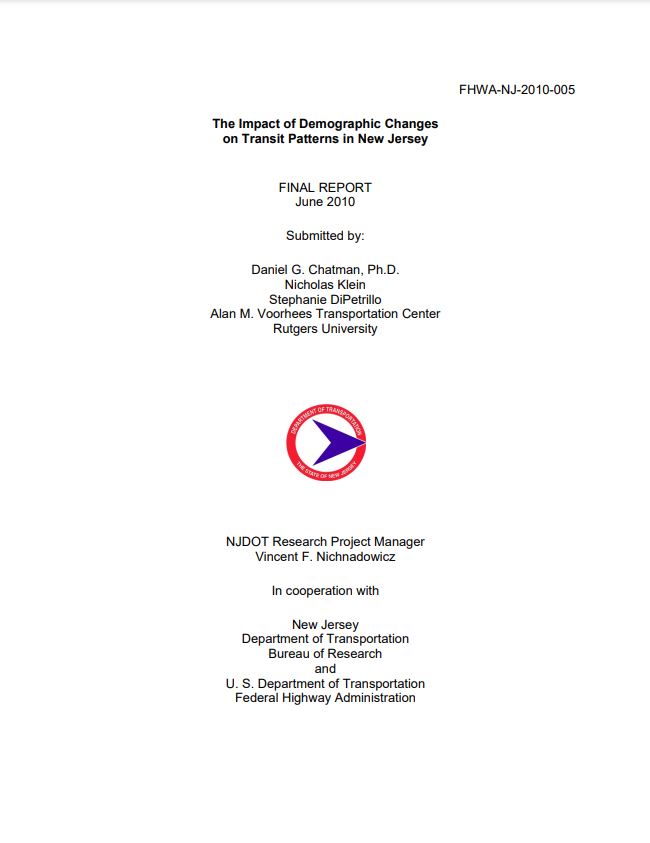 Impact of Demographic Changes on Transit Patterns in New Jersey

Foreign-born residents of New Jersey account for a fifth of its population but almost 40 percent of its transit commuters and all growth in transit commuting since 1980. While immigrants have driven ridership growth, they also rapidly decrease their use of transit the longer they stay in the United States. This study investigates the reasons for higher transit use by immigrants and for the decline in their use of transit over time. Census data, focus groups carried out in 2009, and a survey of households carried out in 2010 reveal not only travel patterns but also residential and workplace location choices. Higher transit use by immigrants seems to be driven primarily by the employment and educational focus that motivates immigration, resulting in an initial choice of home and workplace that is based on optimizing work or school proximity as well access to home-country social networks that are concentrated in areas with high transit accessibility. Higher rail commuting among immigrants is largely explained by their demographic and spatial characteristics, but higher bus commuting is correlated with immigrant status even in analysis controlling for income and citizenship. There are significant differences among the selected region-of-origin groups (India, Latin America and the Philippines). Residents born in Latin America are more likely to use transit for non-work trips, in addition to private shared transportation modes—a new and fast-growing transportation sector. Indian-born residents tend to hold jobs near rail stops while the Latin
American-born have poor transit accessibility on the work end. Possible policies to encourage and retain transit ridership by immigrants include deregulation of land use controls to encourage higher work and residential density, subsidies and better regulation of employer vanpools to serve dispersed workplaces of Latin American immigrants,