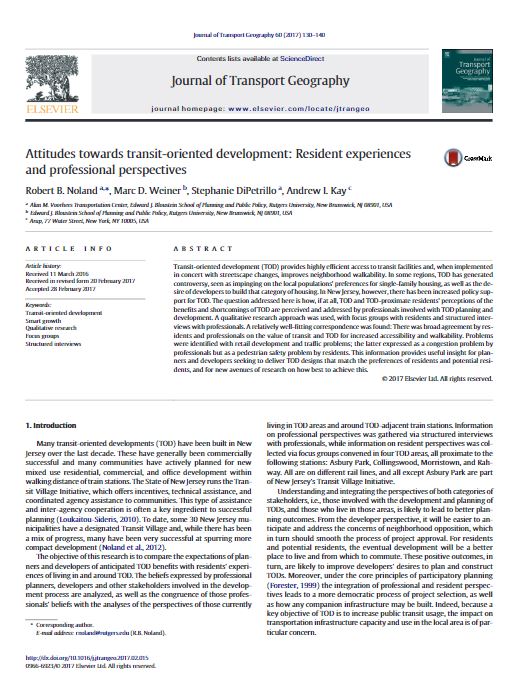 Transit-oriented development (TOD) provides highly efficient access to transit facilities and, when implemented in concert with streetscape changes, improves neighborhood walkability. In some regions, TOD has generated controversy, seen as impinging on the local populations’ preferences for single-family housing, as well as the desire of developers to build that category of housing. In New Jersey, however, there has been increased policy support for TOD. The question addressed here is how, if at all, TOD and TOD-proximate residents’ perceptions of the benefits and shortcomings of TOD are perceived and addressed by professionals involved with TOD planning and development. A qualitative research approach was used, with focus groups with residents and structured interviews with professionals. A relatively well-fitting correspondence was found: There was broad agreement by residents and professionals on the value of transit and TOD for increased accessibility and walkability. Problems were identified with retail development and traffic problems; the latter expressed as a congestion problem by professionals but as a pedestrian safety problem by residents. This information provides useful insight for planners and developers seeking to deliver TOD designs that match the preferences of residents and potential residents, and for new avenues of research on how best to achieve this.