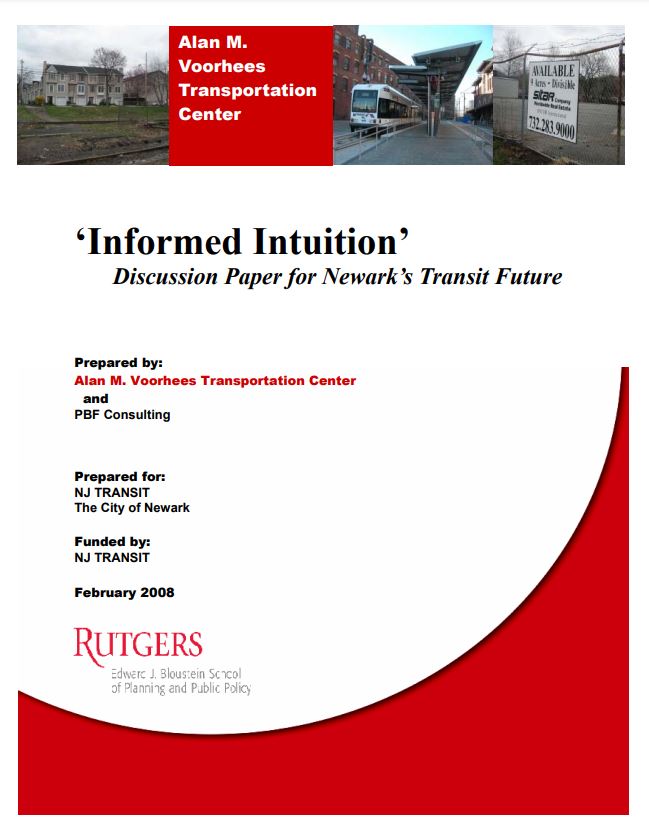 In July 2006, a new municipal administration led by Mayor Cory Booker took office in the City of Newark. Eager to gain a swift understanding and to initiate positive change, the administration immediately began developing a set of goals and objectives for improvement of New Jersey’s largest city and expansion of its employment, especially for city residents.

Assisted by the Regional Plan Association, the Booker Administration conducted a series of workshops involving scores of experts in multiple disciplines. The product of this effort, A Newark Vision Plan, documents goals, principles, strategies and actions that it believes would make Newark an “Equitable, Green, Smart, Prosperous and Accessible” city. It highlights the health of neighborhoods and the impact that efficient (or inefficient) movement of people into, out of and through the city has on the viability of commerce, and citizens’ access to employment.

As a follow-up to this Vision Plan, the Mayor and Stefan Pryor, the Deputy Mayor for Economic Development, Housing & City Planning, recognized the City’s inconsistent interest in transit planning and the absence of a comprehensive and coherent plan for future transit improvements. Consequently, they sought further informed guidance from industry experts on long-range transit concepts, projects and policies that could improve Newark’s transit services, enrich economic and community development, and improve employment opportunities.

NJ TRANSIT agreed to fund the $15,000 effort, informally entitled the “Newark Informed Intuition” study. The Alan M. Voorhees Transportation Center (VTC) of Rutgers University undertook this project which has been jointly guided by NJ TRANSIT and the City of Newark.